Imbolg the first day of Spring 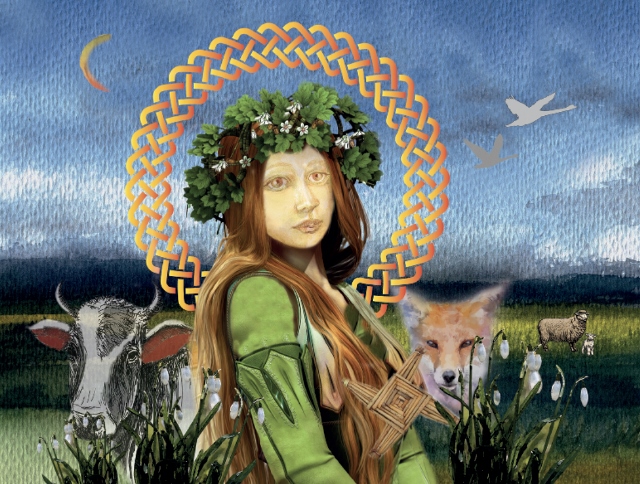 by Dr Karen Ward. This article was commissioned for the RTE website’s Brainstorm section.

The commencement of Spring is celebrated in Ireland on 1st February. It is beyond doubt that the light is clearly returning and whether we feel it or not, the snowdrops and emerging daffodils tell of a shift upwards in temperatures. The trees are alive with songbirds marking breeding territories and calling for a mate to create family. In plant and animal, the sap is rising and we are not immune from this cycle. Although the early weeks of Spring may still have all the personality of Winter, the new season asks us to feel the turn of natural Earth energies with walks in the fresh blustery air.

To our ancestors, the cross-quarter time between Winter Solstice and Spring Equinox marked the cosmic beginning of Spring. They innately understood how the season was created and timed by the Earth’s elliptical journey around the Sun. They called this phenomenon Imbolg (also Imbolc), deriving from an older vernacular of Irish (Gaelic) it refers to ‘in the belly’, a reference to the swollen bellies of ewes with lambs soon to be born.

Communally the festival of Imbolg has been celebrated in ancient and increasingly modern times from the night of January 31st up to the ‘true’ cross quarter time – the exact moment between Winter Solstice and Spring Equinox.

Unlike any other of the 8 Celtic Festivals, Imbolg is unique in having a key central figure revered in Pagan and Christian times – Brigid. The demands on our ancestors were great as they prepared to clear, sow and plant for a good harvest. They needed fitness, nourishment and inspiration at the end of Winter and the beginning of Spring. Brigid gifted them new vision for future prosperous times heralding the warmer, bright days.

In the 5th century it is historically recorded and comprehensively documented by Dr Noel Kissane in his book ‘Saint Brigid of Kildare’ that a woman was born who epitomised the attributes of the Spring Goddess – a quintessential Irish woman in her power and strength, standing up for herself and those who need her guidance. St Brigid was born at Faughart near Dundalk, County Louth, the beloved daughter of Pagan Chieftain of Leinster, Dubhthach and his Christian servant woman Brocca (also known as Broicsech/Brocessa). She was raised in the Druidic tradition but lived at the time of St Patrick who it is said she met and converted her to Christianity.  However, often pagan traditions were subsumed by the Catholic Church and most of St Brigid’s traditions are indeed pagan in origin.

Most Irish schoolchildren will remember the myths and legends of this Irish female matron saint from spreading her cloak over the plains of Curragh to weaving her iconic equilateral cross of reeds. St Brigid founded a spiritual community for both women and men in Kildare. She is the saint of babies, midwives, blacksmiths, scholars, crafters and nature lovers inspiring poetry and the creative arts.

Both Celtic Goddess and Saint Brigid are associated with the elements of Fire and Water. Her perpetual flame burned in Kildare’s Fire Temple for centuries but was extinguished by Cromwell’s soldiers in the 16th century. Fortunately, it was relit in the 1990’s by the Solas Bhríde Sisters and now is tended in their beautiful Solas Bhríde Centre near her Healing and Garden Holy Wells in Kildare. Her many Wells throughout the country are visited on 1st February in tandem with an increasing number of events including Féile Bríde, Kildare, www.solasbhride.ie the Brigid of Faughart Festival, Dundalk www.brigidoffaughart.ie and a revival of her Lá Fhéile Bríde Festival at her Well in Clondalkin, Dublin facebook.com/clondalkinimbolc/

There is an exciting worldwide initiative by Herstory, a recent movement to uncover forgotten but fascinating women’s stories from history, mythology and contemporary culture. This year in partnership with RTE, the Epic Museum and Underground Films, the Herstory project takes place over the Imbolg weekend www.herstory.ie which includes a Brigid’s Global Fire Blessing by the Moon Mná Facilatators www.moonmna.ie

On 31st Jan, Imbolg Eve, women put out a Bhrat Bhríde strip of red or blue material to catch the morning dew. This became the symbol of healing in the house as Brigid bestowed her blessing for the year ahead. Another classic tradition was for a young girl representing ‘Brid Óg’ (Gaelic for ‘Young Brigid’) to come with reeds to the front door as the family waited inside in the dark representing Wintertime. Once welcomed, Bríd Óg entered representing Springtime’s arrival. The family then made their Brigid Crosses placing them at doorways for their protection. For many years the Brigid’s Cross was the test card for RTE, the Irish television station.

May the coming of Spring and Brigid, Goddess and Saint, inspire and nourish you this Imbolg time.